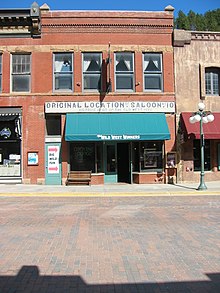 A photograph of Deadwood in 1876. General view of the Dakota Territory gold rush town from a hillside above. 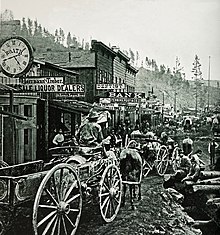 The Gem Variety Theater in 1878 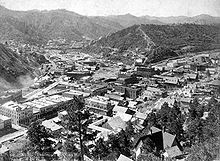 Deadwood (Lakota: Owáyasuta;[6] "To approve or confirm things") is a city in and county seat of Lawrence County, South Dakota, United States. It was named by early settlers after the dead trees found in its gulch.[7] The city had its heyday from 1876 to 1879, after gold deposits had been discovered there, leading to the Black Hills Gold Rush. At its height, the city had a population of 25,000,[8] and attracted larger-than-life Old West figures including Wyatt Earp, Calamity Jane, and Wild Bill Hickok (who was killed there).

According to the 2010 census, the population was 1,270. The entire town has been designated as a National Historic Landmark District, for its well-preserved Gold Rush-era architecture. Deadwood's proximity to Lead often leads to the two towns being collectively named "Lead-Deadwood".

The settlement of Deadwood began illegally in the 1870s, on land which had been granted to the Lakota people in the 1868 Treaty of Fort Laramie. The treaty had guaranteed ownership of the Black Hills to the Lakota people, who considered this area to be sacred. The settlers' squatting led to numerous land disputes, several of which reached the United States Supreme Court.

Everything changed after Colonel George Armstrong Custer led an expedition into the Black Hills and announced the discovery of gold in 1874, on French Creek near present-day Custer, South Dakota. This announcement was a catalyst for the Black Hills Gold Rush, and miners and entrepreneurs swept into the area. They created the new and lawless town of Deadwood, which quickly reached a population of approximately 5,000. By 1876, over 25,000 people settled in Deadwood.[8]

In early 1876, frontiersman Charlie Utter and his brother Steve led to Deadwood a wagon train containing what they believed were needed commodities, to bolster business. The town's numerous gamblers and prostitutes staffed several profitable ventures. Madame Mustache and Dirty Em were on the wagon train, and set up shop in what was referred to as Deadwood Gulch.[9] Women were in high demand by the miners, and the business of prostitution proved to have a good market. Madam Dora DuFran eventually became the most profitable brothel owner in Deadwood, closely followed by Madam Mollie Johnson. 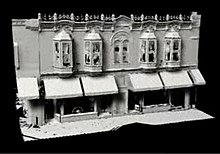 Deadwood became known for its lawlessness; murders were common, and justice for murders not always fair and impartial.[citation needed] The town attained further notoriety when gunman Wild Bill Hickok was killed on August 2, 1876. Both he and Calamity Jane were buried at Mount Moriah Cemetery, as well as other notable figures such as Seth Bullock.

Hickok's murderer, Jack McCall, was prosecuted twice, despite the U.S. Constitution's prohibition against double jeopardy. Because Deadwood was an illegal town in Indian Territory, non-native civil authorities lacked the jurisdiction to prosecute McCall. McCall's trial was moved to a Dakota Territory court, where he was found guilty of murder and hanged.

Beginning August 12, 1876, a smallpox epidemic swept through. So many people fell ill that tents were erected to quarantine the stricken.

In 1876, General George Crook pursued the Sioux Indians from the Battle of Little Big Horn, on an expedition that ended in Deadwood in early September, known as the Horsemeat March. The same month, businessman Tom Miller opened the Bella Union Saloon.

On April 7, 1877, Al Swearengen, who controlled Deadwood's opium trade, also opened a saloon; his was called the Gem Variety Theater. The saloon burned down and was rebuilt in 1879. When it burned down again in 1899, Swearengen left town.

As the economy changed from gold panning to deep mining, the individual miners went elsewhere or began to work in other fields; thus, Deadwood lost some of its rough and rowdy character, and began to develop into a prosperous town.

The Homestake Mine in nearby Lead was established in October 1877. It operated for more than a century, becoming the longest continuously operating gold mine in the United States. Gold mining operations did not cease until 2002. The mine has been open for visiting by tourists.

On September 26, 1879, a fire devastated Deadwood, destroying more than 300 buildings and consuming the belongings of many inhabitants. Many of the newly impoverished left town to start again elsewhere.

In 1879, Thomas Edison demonstrated the incandescent lamp in New Jersey, and on September 17, 1883, Judge Squire P. Romans took a gamble and founded the "Pilcher Electric Light Company of Deadwood". He ordered an Edison dynamo, wiring, and 15 incandescent lights with globes. After delays, the equipment arrived without the globes. Romans had been advertising an event to show off the new lights and decided to continue with the lighting, which was a success. His company grew. Deadwood had electricity service fewer than four years after Edison invented it, less than a year after commercial service was started in Roselle, New Jersey, and around the same time that many larger cities around the country established the service.[10]

In 1888, J.K.P. Miller and his associates founded a narrow-gauge railroad, the Deadwood Central Railroad, to serve their mining interests. In 1893, Chicago, Burlington and Quincy Railroad purchased the railroad. In 1902, a portion of the railroad between Deadwood and Lead was electrified for operation as an interurban passenger system, which operated until 1924. In 1930, the railroad was abandoned, apart from a portion from Kirk to Fantail Junction, which was converted to standard gauge. In 1984, Burlington Northern Railroad abandoned the remaining section.[11]

The gold rush attracted Chinese immigrants to the area; their population peaked at 250.[12] A few engaged in mining; most worked in service enterprises. A Chinese quarter arose on Main Street, as there were no restrictions on foreign property ownership in Dakota Territory, and a relatively high level of tolerance of different peoples existed in the frontier town. Wong Fee Lee arrived in Deadwood in 1876 and became a leading merchant. He was a community leader among the Chinese Americans until his death in 1921.[13]

The quarter's residents also included African Americans and European Americans.[14] During the 2000s, the state sponsored an archeological dig in the area, to study the history of this community of diverse residents.[15]

Another major fire in September 1959 came close to destroying the town again. About 4,500 acres (1,800 ha) were burned and an evacuation order was issued. Nearly 3,600 volunteer and professional firefighters, including personnel from the Homestake Mine, Ellsworth Air Force Base, and the South Dakota National Guard's 109th Engineer Battalion, worked to contain the fire. The property losses resulted in a major regional economic downturn.[16][17]

In 1961, the entire town was designated a National Historic Landmark, for its well-preserved collection of late 19th-century frontier architecture. Most of the town's buildings were built before 1900, with only modest development after that.[18] The town's population continued to decline through the 1960s and 1970s.[19] Interstate 90 bypassed Deadwood in 1964, diverting travelers and businesses elsewhere. On May 21, 1980, a raid by county, state, and federal agents on the town's three remaining brothels — "The White Door", "Pam's Purple Door" and "Dixie's Green Door" — accomplished, as one reporter put it, "what Marshal Hickok never would have done," [20] and the houses of prostitution were padlocked.[19] A fire in December 1987 destroyed the historic Syndicate Building and a neighboring structure.[19]

The fire prompted new interest in the area and hopes to redevelop it. Organizers planned the "Deadwood Experiment," in which gambling was tested as a means of stimulating growth in the city center.[19][21] At the time, gambling was legal only in the state of Nevada and in Atlantic City.[22]

Deadwood was the first small community in the U.S. to seek legal gambling revenues in order to maintain local historic assets.[22] The state legislature legalized gambling in Deadwood in 1989, which rapidly generated significant new revenues and development.[23] The pressure of development since then may have an effect on the historical integrity of the landmark district.[23] Heritage tourism is important for Deadwood and the state.

In the summer, there are numerous trails for hiking, horseback riding, and mountain biking. The northern end of the George S. Mickelson Trail starts in Deadwood and runs south through the Black Hills to Edgemont. Several man made lakes, including Sheridan Lake, provide fishing and swimming. Spearfish Canyon to the north has many places to rock climb. In early June, the Mickelson Trail Marathon and 5K, as well as accompanying races for children, are held.

During the winter, two ski areas operate just a few miles outside of nearby Lead, South Dakota: Terry Peak and Deer Mountain.

The Midnight Star was a casino in Deadwood owned by American film actor Kevin Costner. The casino opened in the spring of 1991, after Costner had directed and starred in the Academy Award-winning film Dances With Wolves (1990), which was filmed mainly in South Dakota. The Midnight Star was a saloon which featured prominently in the previous western Costner had acted in, Silverado (1985), one of his first major roles. International versions of many of his films' posters lined the walls. The casino closed in August 2017.[26]

Deadwood's climate varies considerably from the rest of the state and surrounding areas. While most of the state receives less than 25 inches (640 mm) of precipitation per year, annual precipitation in the Lead—Deadwood area reaches nearly 30 inches (760 mm). Despite a mean annual snowfall of 102.9 inches (2.6 m), warm chinook winds are frequent enough that the median snow cover is zero even in January, although during cold spells after big snowstorms there can be considerable snow on the ground. On November 6, 2008, after a storm had deposited 45.7 inches (1.2 m) of snow, with a water equivalent of 4.25 inches (108 mm), 35 inches (0.9 m) of snow lay on the ground.[27]

The summer season is very warm, although with cool nights: only one afternoon in five years will top 100 °F (38 °C), and only 10.7 afternoons equal or exceed 90 °F (32 °C). Rainfall tapers off during the summer: August 2000 was one of only two months in the 30-year 1971 to 2000 period to see not even a trace of precipitation. The fall is usually sunny and dry, with increasingly variable temperatures. The last afternoon of over 80 °F (27 °C) can be expected on October 5, but the first morning freeze can be expected as early as September 23, and the first snowfall also around October 5.

There were 669 households, out of which 20.5% had children under the age of 18 living with them, 37.7% were married couples living together, 10.9% had a female householder with no husband present, and 48.9% were non-families. 40.1% of all households were made up of individuals, and 14.6% had someone living alone who was 65 years of age or older. The average household size was 2.01 and the average family size was 2.71.

There were 661 households, of which 17.2% had children under the age of 18 living with them, 33.4% were married couples living together, 7.4% had a female householder with no husband present, 4.8% had a male householder with no wife present, and 54.3% were non-families. 44.6% of all households were made up of individuals, and 12.7% had someone living alone who was 65 years of age or older. The average household size was 1.88 and the average family size was 2.60.

Several frontier towns of the old west have become the stuff of legend. Places such as Dodge City, Tombstone, Virginia City or Deadwood are familiar names to anyone versed in the folklore of the old west.
View more

AboutContactImprintPrivacy StatementFeeds
A project by Alex Seifert.
Cookies are used for analytics.